How our 0-10 training was born

Every athlete in every sport needs to be faster. I have never coached anybody who was too fast. My approach is to train every athlete to be a sprinter, that way they can train fast, become faster, and when they play their sport, the sport’s posture will take over and they will be a faster athlete no matter what the field of play. With that said, there needs to be a systematic approach to this.

During the 2001 training season with USA skeleton, I was at Lake Placid Olympic Training Center with 48 hopefuls from around the country. I was their coach, well kinda. They had come from everywhere and most of them had a coach back home or trained solo. My overall goal was to keep from alienating or insulting anyone (because I may do things differently). My second goal was to train them right.

At a whiteboard one afternoon, the summation of all the training we would be doing came to me and I am still using it to this day. It is all you really need to know:

We already were doing 0-10 training before I fully formed the idea.

The beginning of the concentrated 0-10 training from my program came one offseason day in June of 1994 while we were out on the track. During a break during speed training, I asked one of my veteran Maverick players, “How will you know when it’s time to retire?” He shocked me with how quickly he responded, without pause or hesitation he said,

“When I lose my first step.”

That June day, 0-10 training was born. 0-10 is about an athlete’s start, but the nuance of looking at steps 1 & 2 first before getting bogged down by the other details, is what stands this method apart.

Look at the speed and speed training from the most common reference point: the 100-meter dash.

In Olympic track and field, the 100-meter champion is considered the world’s fastest human. Yes, in the 100 meters, but not always in shorter distances… The first person out of the blocks at the start is not always the winner and the eventual winner may pull away somewhere between 60 and 80 meters.

That’s the 100-meter, but athletes at 60 meters and below have different factors. For example, baseball players run a 60-yard dash with a standing start and a 90-degree turn, while football players have one hand down for a 40-yard sprint.

All of these athletes still have to take steps 1 & 2. Still, a large number of coaches use the 100-meter dash as the reference. So, to simplify and systematize training, a rule was developed: Take the top end (60-80 meters) and push that speed, technique, mechanics, etc. as close to the start as possible. At 60 meters, it is long over for football, baseball, tennis, skeleton, basketball, and other sports– that’s why they use the 40-yard dash.

What we do is teach everyone quick steps 1 & 2 out of their starting stance, thus making speed and sport combine for one particular sprinting result.

What we do is teach everyone how to get fast steps 1 & 2 out of their most common starting stance, thus, speed and each sport must match their training methods. 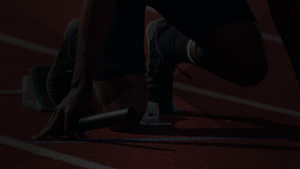